A longstanding witness of our Magic City. 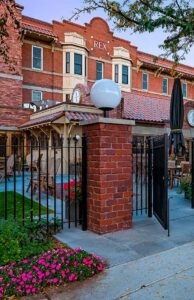 Built in 1910, just 28 years after Billings itself was settled, the Rex has long been a formidable presence in the historical landscape of Montana. It’s on the National Register of Historic Places, is a remnant of the true Old West, and was a witness to the prohibition era — a modern reminder of the storied history that Billings stands on.

Back in its heyday, the Rex was a popular hangout spot for the everyday Billings working man, as well as more well-to-do figures like Will James, Buffalo Bill, and Calamity Jane. During prohibition, the hotel bar became known widely as a restaurant, but continued to serve alcohol through its “floating bar,” which changed locations nightly. It’s also said that the bar was connected to Billings’ system of underground tunnels.

After a few successful decades, business began to slow down in the 1960s when the railroad industry began to peter out. By 1975, only the main floor of the hotel was being used, and the owners were forced to schedule a date to have the building torn down. However, one day before the wrecking ball date, a Billings local named Senia Hart stepped in and bought the building. After several owners and renovations, the bar soon became a high-class restaurant known for its steak and seafood, maintaining this reputation for the next thirty years.

Now, after a fresh remodel and new ownership, the Rex has once again been brought back to life. The latest remodel features a luxurious, state-of-the-art interior that will last for many years, and help us provide the Billings community excellent, top notch service. A vibrant, new experience in local fine dining.

Learn more about our story.

© 2022 Buffalo Block Prime Steakhouse at the Rex.
All Rights Reserved.